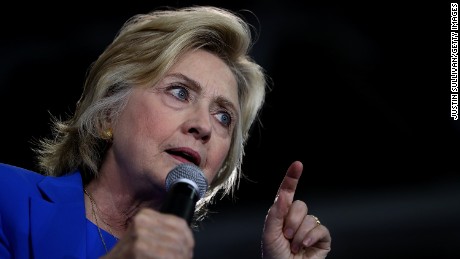 New York (CNN)The controversy around Hillary Clinton saying “half” of Donald Trump’s supporters fall into “the basket of deplorables” is what Clinton’s top aides have long been worried about: a situation in which her trademark caution elevates an inartful comment.

The former first lady positions herself as even-keeled in contrast to the unpredictable Trump, whom she’s called “temperamentally unfit” for the Oval Office. So when she makes a mistake — particularly a highly public one, as she did Friday night — it’s magnified.
Friday’s comments came at the end of Clinton’s most media accessible week of the campaign, one in which she answered questions from reporters four separate times. When she took the stage to introduce Barbra Streisand at the New York event, it was only the sixth time her pool of traveling reporters had been allowed into one of her over 330 finance events.
It may very well be her last.
Clinton’s remark was similar to one she’s made recently on a topic she is eager to discuss, only this time, she added the word “half” — labeling millions of Americans as bigots. Almost immediately after the remarks were widely reported, #BasketofDeplorables began trending on Twitter, with Trump and his supporters stoking the flames online.
On Saturday morning, the clip was played countless times on television and online. By early afternoon, Clinton walked back her comments.
“Last night I was ‘grossly generalistic,’ and that’s never a good idea,” Clinton said in her statement. “I regret saying ‘half’ — that was wrong.”

Clinton’s campaign is happy to have a debate about its belief that Trump’s movement is animated by racism, Democrats close to the campaign said Saturday.
But the fact that she condemned half of Trump’s supporters is what worried Clinton’s senior aides, who said Saturday they couldn’t have a conversation around racism before Clinton backed away from that part of the comment.
The decision to release a statement came after video of the comment was played repeatedly on cable and broadcast news Saturday morning. The Clinton campaign’s initial response to the comment was to hunker down and hope it blew over, while her aides defiantly took to Twitter, noting some of Trump’s most vitriolic statements.
But the comments, aided by Trump’s campaign, continued to reverberate.
“Wow, Hillary Clinton was SO INSULTING to my supporters, millions of amazing, hard working people. I think it will cost her at the Polls!” Trump tweeted Saturday morning.
It quickly became clear Clinton had to do something.
But when walking back the remarks, Clinton also vowed to continue “calling out bigotry and racist rhetoric in this campaign” while emphasizing that she still wanted to be seen as a candidate of unity.
“I’m determined to bring our country together and make our economy work for everyone, not just those at the top. Because we really are ‘stronger together,'” Clinton wrote.
And while Clinton did say she regretted the comment, she did not apologize to people she may have offended.
Going forward, Clinton aides plan to force Trump to talk about racist elements behind his campaign — like she did last month with a speech claiming far-right groups are having an outsized influence — while framing Clinton’s admission of a mistake as something that Trump would never do.

Clinton and her aides have long said there has been double standard in the way Trump can make outrageous statements that, they adamantly believe, would imperil her campaign.
“A lot of this behavior coming from him seems to be expected somehow,” Clinton said. “And that is fine if you are a reality TV star or you are a real estate developer. I don’t think it is fine if you want to be president of the United States.”
On Thursday, she called it “frustrating.”
“But it is just part of the landscape that we live in and we just keep forging ahead,” Clinton said.
Her aides have been even more blunt, watching in disbelief since the start of Trump’s campaign as he has surged in the polls despite making one salacious comment after another.
“Can you imagine if she did anything like that?” one aide said after Trump mocked a reporter’s physical disability by mimicking him at an event.
“Can you imagine” has become a common refrain among Clinton aides, especially after Trump said Republican Sen. John McCain — who was held and tortured in Vietnam for more than five years — was not a war hero because he was captured and when he boasted that he could “stand in the middle of 5th Avenue and shoot somebody” and not lose voters.

So Democrats close to Clinton were furious Saturday that her comments were seen as controversial.
“I think it’s ridiculous that there’s a debate about whether Donald Trump has a sizable bloc of supporters who are racists,” said one Democratic operative close to the Clinton campaign who requested anonymity in order to speak candidly. “Hillary’s detractors in the GOP and the press rip her for not telling the truth, and then when she does, they rip her for doing that. It’s absurd.”
Bakari Sellers, a Clinton surrogate and CNN contributor, was defiant when asked about the remark, suggesting that it didn’t matter if Clinton referred to half or merely some of Trump’s supporters as “deplorables.”
“This election is about beating back bigotry and hate,” Sellers said in an interview. “Whether it’s 10% or 50%, Donald Trump and his supporters have elevated it. If you’re not a bigot, her comments shouldn’t offend you.”
Tim Kaine, Clinton’s running mate, even argued to The Washington Post that she didn’t need to apologize.
Just over an hour after the Post’s story published, Clinton issued her statement of regret.