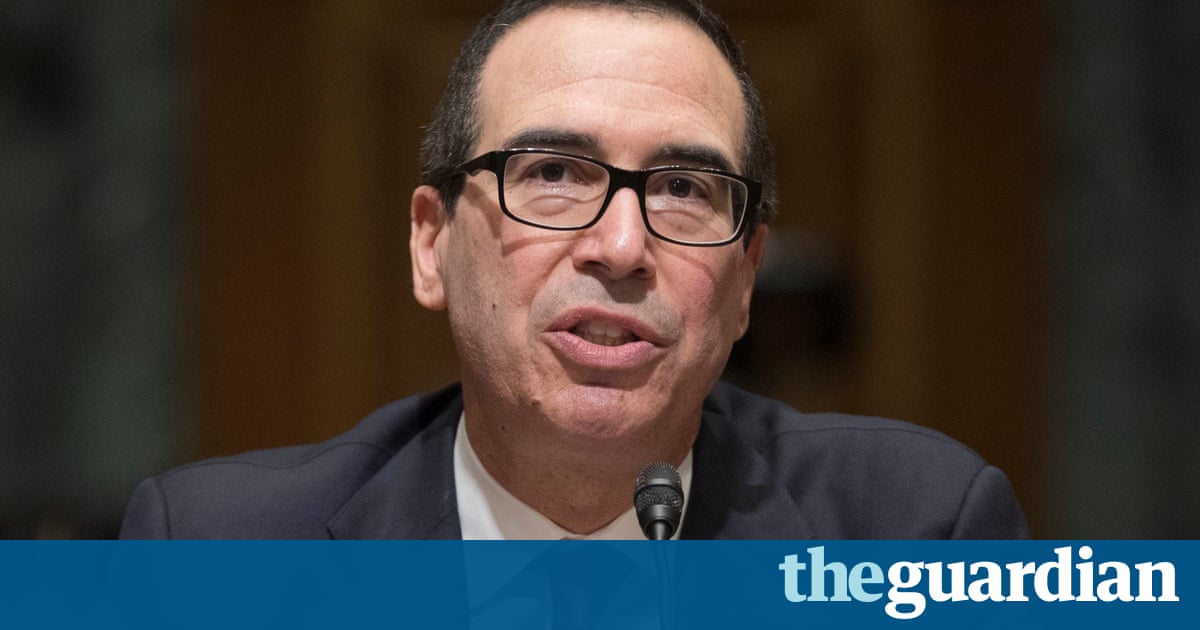 Steven Mnuchin, the hedge fund millionaire Donald Trump has picked to run the US treasury, failed to disclose nearly $100m in assets to Congress, including his role as a director of offshore funds and close to $1m in art owned by his children.

The error was disclosed hours before Mnuchin was grilled by the Senate finance committee on Thursday over his role at a California bank that foreclosed on thousands of vulnerable borrowers, his attitude to tax havens and the future regulation of the US financial system.

On Wednesday night the committee learned Mnuchin had initially failed to disclose he was a director of Dune Capital International, an investment fund incorporated in the Cayman Islands, a tax haven. He also omitted other assets, including $95m in real estate and $906,556 worth of artwork held by his children.

Mr. Mnuchin has claimed these omissions were due to a misunderstanding of the questionnaire he does not consider these assets to be investment assets and thus did not disclose them, even though the committee directs the nominee to list all real estate assets, according to documents filed with the committee.

Mnuchin was questioned by the Democratic senator Bob Menendez who asked how he had failed to disclose the assets when he signed a statement listing his holdings on 19 December.

I have a ton of other questions on policy but first and foremost is truth and veracity, what Americans need in their treasury secretary said Menedez. In essence isnt it true that what you did here is take these companies, put them offshore so you could help your clients, who you were making money from, to avoid US taxation.

Mnuchin said that was not true at all.

I assure you that these forms were very complicated, he said. When I certified those forms I thought it was correct. Mnuchin said he may have erred in giving the forms in early and should have waited and that his lawyer had assured him he had filled the forms in correctly.

It doesnt take a rocket scientist to understand list all entities, said Menendez.

Mnuchin said his decision to move his investment vehicles offshore was not always about taxes but about making investments eligible for pensions and other non-profits. These are very complicated issues. We need tax code simplification, he said. Mnuchin said he was in favor of changing the tax code and to make sure we dont let anybody avoid taxes.

Over five hours the treasury secretary nominee remained composed as he faced tough questions over his management of OneWest, a California bank created after he took over IndyMac in 2009 after it collapsed during the financial crisis, dragged down by a portfolio of bad loans.

OneWest foreclosed on more than 36,000 homeowners under Mnuchin. including one 90-year-old woman over a 27-cent payment error. Under Mnuchin, OneWest churned out foreclosures like Chinese factories churned out Trump suits and ties, Senator Ron Wyden told the hearing.

On Wednesday, Senator Elizabeth Warren accused Mnuchin of making millions at OneWest by grinding families into the dirt. Warren held a press conferences with four women who had loans with Mnuchins former firm and who had either lost their home or were in danger of being evicted.

In his prepared testimony for his confirmation Mnuchin denied accusations that OneWest Bank was a foreclosure machine designed to profit from the bursting of the housing bubble.

Since I was first nominated to serve as treasury secretary, I have been maligned as taking advantage of others hardships in order to earn a buck. Nothing could be further from the truth, Mnuchin wrote in his opening statement.

Mnuchin said he could not talk about specific loans because of privacy but that some had been in the public eye. The most troubling was to the octomum [Natalie Suleman, who became a media celebrity after she gave birth to octuplets in January 2009]. We worked very, very hard, that was a terrible situation, to move her to another home that they could afford, he said.

There were mistakes, we regret those, said Mnuchin. He said banks would prefer to make a loan modification than to foreclose which is very costly to the bank.

Senator Orrin Hatch, Republican chairman of the committee, said it was disappointing that Democrats were unfairly objecting to Trumps nominees and that if the Senate concentrated on Mnuchins qualifications there would be little if any opposition to Mr Mnuchins nomination.

Hatch dismissed Warrens conference as a mock hearing that was essentially unrelated to Mr Mnuchins qualification for the job.