The bank said on Friday, days after John Stumpf announced his retirement, that earnings slipped in the third quarter, though the results beat expectations 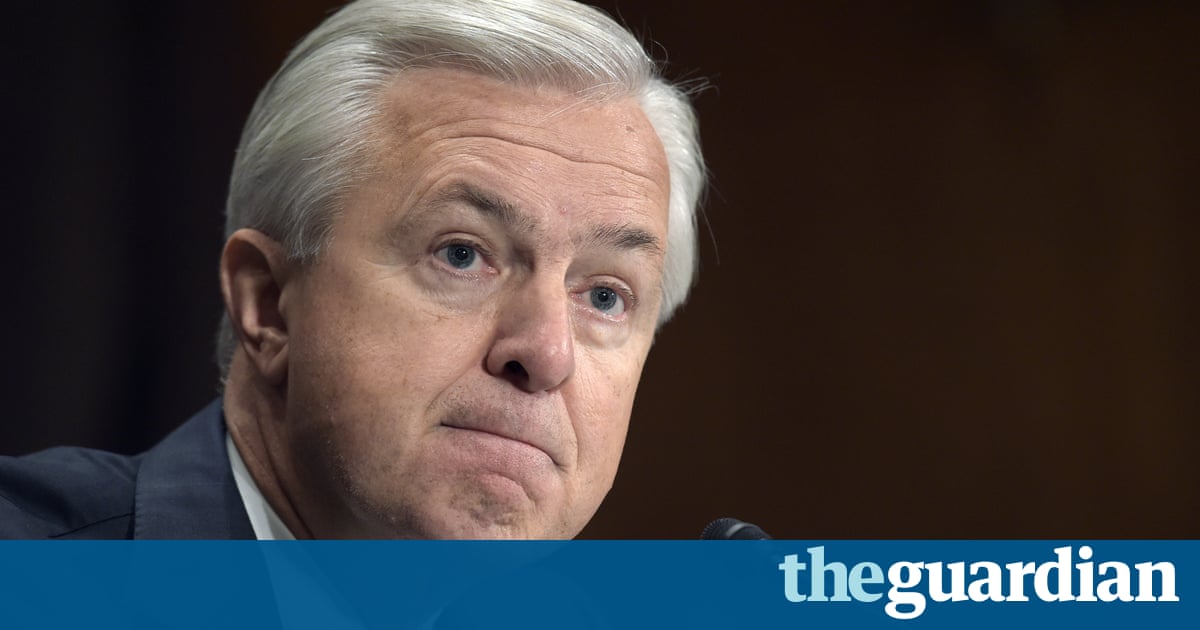 Wells Fargo profits dropped by 2.6% as earnings slipped in the third quarter, the bank said on Friday, days after its chief executive and chairman, John Stumpf, announced his retirement in the wake of a scandal over sales practices.

In early September, Wells Fargo reached a $185m settlement with regulators following allegations that employees opened up to 2m bank and credit card accounts without customers authorization, in order to meet sales goals.

Under pressure from politicians and investors, Stumpf retired on Wednesday. John will not receive any severance payment. His retirement benefits are disclosed in our proxy statement, a spokeswoman told the Guardian.

Stumpf could however leave with as much as $130m, according to CNN Money analysis. Stumpf owns 2.4m shares of stock, worth $107m.

If Wells Fargos John Stumpf is leaving with all of his ill-gotten millions, thats still not real accountability, Massachusetts senator Elizabeth Warren tweeted after Stumpf announced his retirement.

Warren, a leading voice for accountability and reform in the financial sector, previously called on Stumpf to resign, return every nickel he made during the scam and submit to inquiry from Securities and Exchange Commission and the US Department of Justice.

A bank teller would face criminal charges and a prison sentence for stealing a handful of twenties from the cash drawer, she said.

Stumpf has forfeited stock awards worth $41m; had he stayed on, he was to forgo any salary while an independent investigation into sales practices was ongoing.

Carrie Tolstedt, who oversaw the retail banking business when the unauthorized accounts were created, retired earlier this year. According to Wells Fargo, Tolstedt will not receive severance and has waived about $19m in unvested stocks.

However, she is still to walk away with about $77m. In mid-September, the bank told US lawmakers Tolstedt owned 960,017 shares, then worth about $43.6m, and $34.1m worth of vested stock options.

Chief operating officer Tim Sloan was named to replace Stumpf as chief executive. In a statement, he said: I am deeply committed to restoring the trust of all of our stakeholders, including our customers, shareholders, and community partners.

We know that it will take time and a lot of hard work to earn back our reputation, but I am confident because of the incredible caliber of our team members. We will work tirelessly to build a stronger and better Wells Fargo for generations to come.

Asked in a call with investors on Friday if Wells Fargo should consider bringing in someone new to lead the bank, Sloan said that was a fair question but said the board was comfortable with and supportive of the current management team.

Sloan also said it was disturbing to hear claims of retaliation against staff members who tried to flag the practice of opening unauthorized accounts. Wells Fargo, he said, had reached out to staff members who were let go for not meeting their sales quotas and might be eligible for rehire. As of 1 October, the bank has eliminated sales quotas in its retail banking business.

Employees are the banks most important asset, Sloan said.

From 2011, more than 5,300 such employees were fired for creating unauthorized accounts. Stumpf said those firings were not part of an orchestrated effort.

Matt Moscardi, head of financial sector research at MSCI, said scapegoating former employees and firing those who did not meet quotas could hurt Wells Fargo. A significant drop in productivity, he said, would lead to a drop in revenue.

Fridays results do not reveal the long-term impact of the sales-practice scandal, which broke in mid-September, when the quarter was nearly over. The bank had noticeably higher non-interest expenses in the quarter, due partly to the $185m settlement.

In a presentation to investors released on Friday, Wells Fargoreported a drop in what it called banker and teller interactions in September, from both a year previously and from August, before the scandal broke.

The bank said referrals for mortgages from retail branches were down 24% from August. Retail branch referrals account for 10% of all mortgage originations at what is the nations largest mortgage lender.