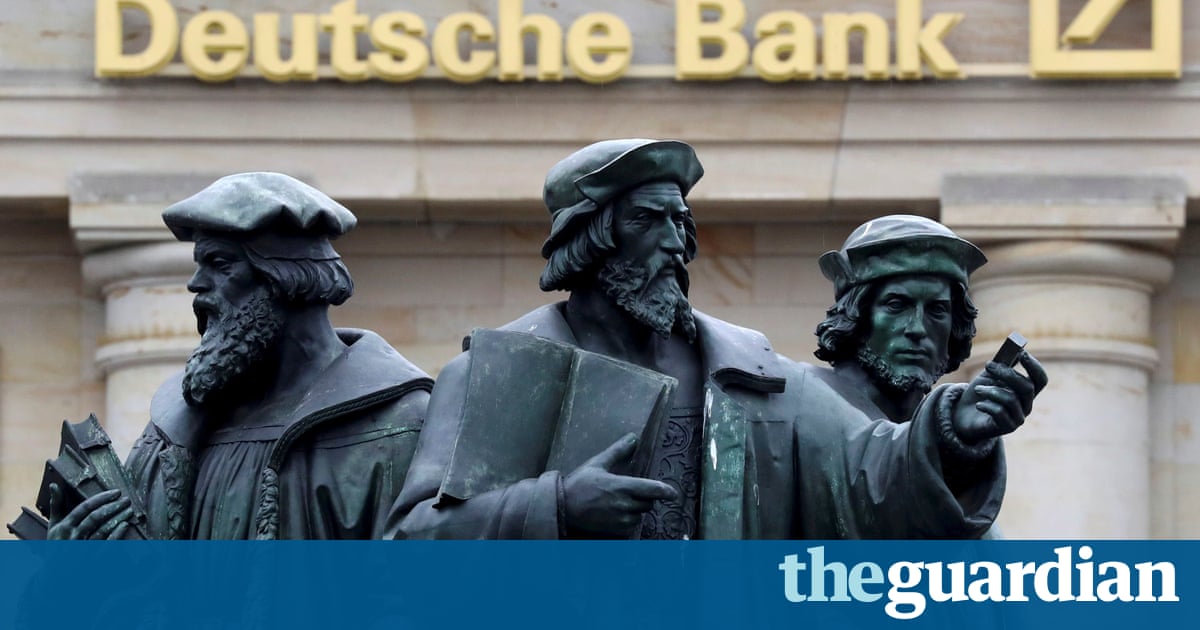 Deutsche Bank has been fined more than $630m (506m) for failing to prevent $10bn of Russian money laundering and exposing the UK financial system to the risk of financial crime.

The UKs Financial Conduct Authority imposed its largest ever fine 163m for potential money laundering offences on Germanys biggest bank, which it said had missed several opportunities to clamp down on the activities of its Russian operations as a result of weak systems to detect financial crime between 2012 and 2015.

A US regulator, the New York Department of Financial Services (DFS), also fined the bank $425m as it listed problems at Deutsche including one senior compliance officer stating he had to beg, borrow, and steal to get the resources to combat money laundering. As part of the settlement, the DFS has imposed a monitor, who will police the behaviour inside the bank for two years.

The latest run-in with regulators comes as Deutsches chief executive, John Cryan, tries to clean up the bank. Last month it paid $7.2bn to settle a decade-old toxic bond mis-selling scandal with the US Department of Justice .

The German bank admitted that the investigations into its Russian operations over so-called mirror trades had not yet finished. It said it was cooperating with other regulators and law enforcement authorities. The DoJ is reported to be among them.

Deutsches share price has been extremely volatile in recent months over concerns about the banks ability to pay fines, at one point dipping to less than 11 last autumn . Its share price before the financial crash was 117.

As the latest penalties were announced, the shares fell by 0.5% to 18.52 valuing the bank at 25bn, which is less than half that of the UKs Lloyds Banking Group, for example.

In a memo to staff Karl von Rohr, chief administrative officer of Deutsche,said: We deeply regret the banks role in the issues cited. He added that the number of staff employed to fight crime had risen 30% in 2016 and now stood at 700. Another 450 will be hired this year.

The FCA said Deutsches anti-money laundering (AML) controls were not tough enough to stop the bank being used by unidentified customers to transfer approximately $10bn from Russia to offshore bank accounts in a manner that is highly suggestive of financial crime. Money was moved via Deutsche Bank in the UK, to obank accounts overseas, including onesin Cyprus, Estonia, and Latvia, the FCA said.

Mark Steward, director of enforcement and market oversight at the regulator, said: Financial crime is a risk to the UK financial system. Deutsche Bank was obliged to establish and maintain an effective AML control framework. By failing to do so, Deutsche Bank put itself at risk of being used to facilitate financial crime and exposed the UK to the risk of financial crime.

The size of the fine reflects the seriousness of Deutsche Banks failings. We have repeatedly told firms how to comply with our AML requirements and the failings of Deutsche Bank are simply unacceptable. Other firms should take notice of todays fine and look again at their own AML procedures to ensure they do not face similar action.

The penalties relate to the bank failing to obtain information about its customers involved in mirror trades ones which mirror each other and have no economic purpose which allowed Deutsche Banks Russia-based subsidiary (DB Moscow) to execute more than 2,400 pairs of trades between April 2012 and October 2014.

Shares in major Russian companies were paid for in roubles through the Moscow office and then the same stock would be sold through London, sometimes on the same day, for a related customer, the New York regulator said. The sellers were registered in offshore locations and received payment for the shares in dollars. A dozen entities were identified.

The FCA said the purpose of $6bn mirror trades was the conversion of roubles into US dollars and the covert transfer of those funds out of Russia, which is highly suggestive of financial crime.

The regulators found almost $3bn in 3,400 suspiciousone-sided trades also occurred. The FCA believes that some, if not all, of these formed one side of mirror trades. They were often conducted by the same customers involved in the mirror trading.

This Russian mirror-trading scheme occurred while the bank was on clear notice of serious and widespread compliance issues dating back a decade. The offsetting trades here lacked economic purpose and could have been used to facilitate money laundering or enable other illicit conduct, and todays action sends a clear message that DFS will not tolerate such conduct, said New Yorks financial services superintendent, Maria Vullo.

The FCA described Deutsche Bank as being exceptionally cooperative and having committed to solve the problems in its AML systems. The bank received a 30% discount for its cooperation. This is a contrast to 2015 when the bank was fined for rigging Libor and accused of being obstructive towards regulators in their investigations into the global manipulation of the benchmark rate.

Last year, Deutsche said, it had taken disciplinary measures with regards to certain individuals in this matter and will continue to do so with respect to others as warranted.

January 2017 75m to resolve a US government lawsuit over hiding tax liabilities to the Internal Revenue Service in 2000.

November 2015 200m for breaching US sanctions with Iran and Syria.

Banks to pay out for mis-selling mortgage securities, as Department of Justice launches legal action against Barclays 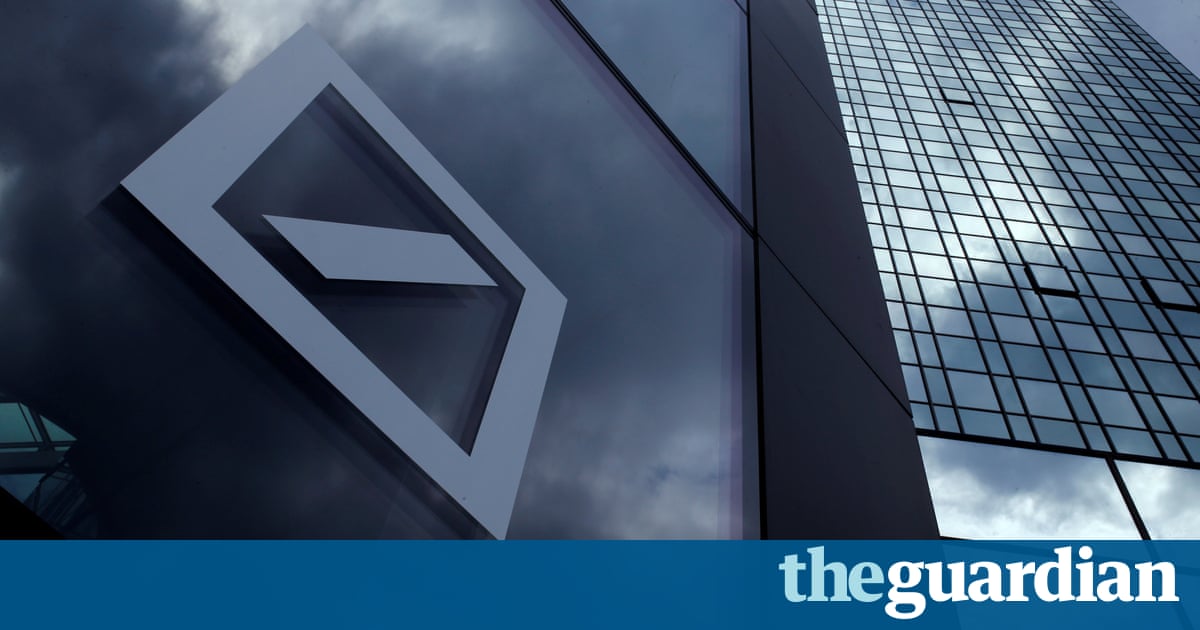 The US Department of Justice has extracted $12.5bn in settlements from Deutsche Bank and Credit Suisse for a decade-old toxic bond mis-selling scandal. It has also started legal proceedings against Barclays, which, in an unprecedented move, has refused to settle with the authorities.

Deutsche, Germanys biggest bank, will pay $7.2bn (5.9bn) to the DoJ. The sum is considerably less than the $14bn originally demanded. Credit Suisse has agreed to pay $5.3bn. Both settlements relate to the complex packaging of home loans, which was a lucrative business for the banking industry until the 2008 crisis.

The DoJ did not disclose the size of penalty it wanted to levy on Barclays, but it is understood to be $4bn. It accused the bank of plainly irresponsible and dishonest conduct.

The flurry of announcements just hours before the markets closed for the Christmas holiday came weeks before Donald Trump takes over as US president and follows months of negotiation between the banks and the DoJ, led by the US attorney general, Loretta Lynch.

The scandal dates back to 2005 and 2007, when banks packaged up home loans and used them to help create bonds known as residential mortgage-backed securities (RMBS) which were sold to investors. The mortgage repayments made by borrowers then provided a yield to the investor, so long as the borrower kept paying. The schemes fell apart when loans were made to borrowers who were unable to repay.

The penalties are part of Barack Obamas efforts to hold banks accountable, and the first major agreements to be reached with non-US banks. JP Morgan, Goldman Sachs, Morgan Stanley, Bank of America Merrill Lynch and Citi have all been punished already.

There are further penalties to come, notably for Royal Bank of Scotland. The bank could face a bill of as much as 9bn, analysts have said. Its shares rose 1% on hopes that it might soon be able to reach a settlement with the DoJ which it had hoped would take place this year or at least start to estimate its own bill.