Pence: ‘Trump and I have denounced David Duke repeatedly’ 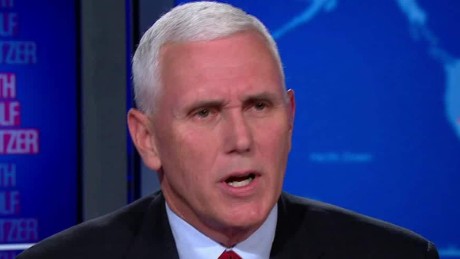 “I have no idea why this man keeps coming up,” the Indiana governor told reporters at a Capitol Hill news conference. “Donald Trump and I have denounced David Duke repeatedly. We have said that we do not want his support and we don’t want the support of people who think like him.”
Speaking to CNN’s Wolf Blitzer on Monday, Pence declined to call Duke “deplorable,” though he disavowed his support.
Pence spoke to reporters following a meeting with Republican leaders on Capitol Hill aimed to assuage concern about the party’s nominee. Multiple House Republicans told CNN that Pence told personal stories about Trump and his dealings with him one-on-one, and that his running mate helped humanize the real estate mogul for a group that doesn’t know the GOP nominee well.
Before becoming Indiana’s governor, Pence served in the House for more than 10 years.
Pence told House Republicans in the closed-door meeting that he didn’t know Trump when they first met, but had gotten to know him well, citing what he said was Trump’s kindness and things he’s done to show that he’s different than what people see on TV.
Pence also said that the GOP ticket has “momentum,” and when asked about its vulnerability with female voters, Pence argued that they are going to come out in large numbers for the GOP.
One GOP source in the room told CNN that Nebraska GOP Rep. Jeff Fortenberry asked Pence about concerns his daughter has raised with him about some Trump comments about women.
Pence praised the nominee and told Fortenberry “give your daughter a hug for us.”

« PreviousTrump to visit Flint Wednesday
Next »After the hajj: Mecca residents grow hostile to changes in the holy city