If the Department of Justice lived up to its name, it would move forward with John Stumpfs criminal investigation 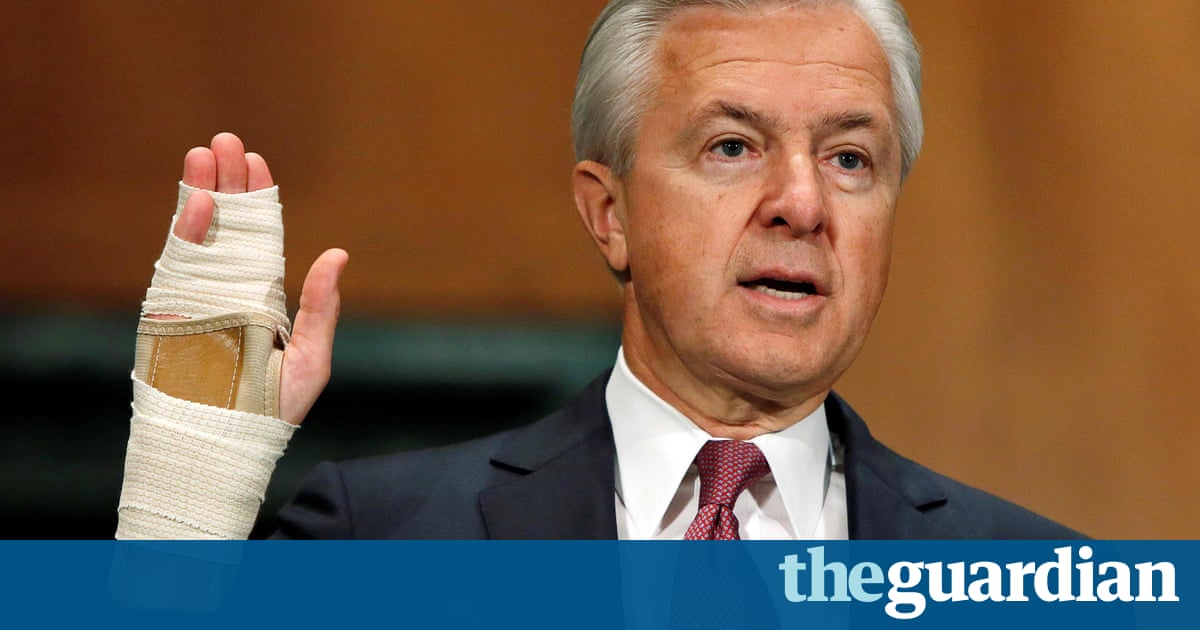 For former Wells Fargo CEO John Stumpf, this will be his first weekend as a wealthy retiree. So it goes in a world where big banks can screw over customers and the public, and the CEO who presided over these practices can slink off into the sunset unencumbered by the kind of real retribution that plagues small-time drug users and petty thieves. They go free. We pay the price.

Two days before the banks quarterly earnings announcement, Stumpf announced his immediate resignation. That decision came about a month after the firm was slapped with a $185m settlement for a fee-stealing scam that resulted in the axing of 5,300 low-level employees. He did not resign after settlements for any of the prior wrongdoing that took place under his purview for which the firm paid about $10bn in fines.

Make no mistake. Stumpf was the captain and commander of this $1.9tn empire. Its culture, as in all Wall Street culture, was defined from the top down, not the other way around. For his penance, all Stumpf had to do was forfeit $41m in restricted stock awards (stock he didnt even fully own yet).

The figure for Stumps exit hoard is currently valued around $134m, a pretty plush parachute. That includes his vested stock and other retirement plans. But that figure can rise. The firms stock took a beating due to this latest scandal (its still down 11%). With Stumpf out and this cross-selling or sales practice scrubbed in the wake of his departure, rising share prices to pre-scandal levels could place his take closer to $160m or above. So Stumps departure holds monetary value for him. In bankster terms, its a slam dunk trade.

Massachusetts senator Elizabeth Warren and other senators have called for his resignation, a return of every nickel he made during the scam and a Department of Justice and US Securities and Exchange Commission investigation. So far, Warren pointed out in a tweet, only one of those things has happened. He shouldnt be afforded impunity (like other big bank CEOs) for running Wells during an effective crime spree.

Her request for DoJ criminal investigations into Stumpfs role, in just this scandal, has not been honored. Even if it were to be, would it get very far? There have been zero criminal indictments for any mega-bank CEO, regardless of the breadth, depth and cost of the crimes committed by their institutions under their stewardships. Stumpfs chances look pretty damn good.

Stumpfs number two man, 29-year Wells veteran Timothy Sloan, is being touted as the anti-Stumpf; clean, not of the retail unit that swindled the banks average customers. Only it wasnt just the retail unit implicated in settlements. Wellss fines included $1.4bn for allegations of misleading investors in securities auctions, $5bn for loan services and foreclosure abuses, and $1.2bn for defrauding the US government regarding mortgages eligible for federal insurance.

Sloans roles spanned wholesale and commercial banking operations (areas implicated by these settlements.) Plus, as chief operating officer since November 2015, Sloan was responsible for ensuring good practices for that retail unit. Clean is relative. And meaningless.

The new board chairman, Stephen Sanger, said Stumpf believes new leadership at this time is appropriate to guide Wells Fargo through its current challenges and take the Company forward. Current challenges. Thats the kind of terminology that whitewashes the gravity of what he did. If the Department of Justice had the balls, it would move forward with Stumpfs criminal investigation and minimally slap him with an indictment. So far, it has not shown such aptitude.