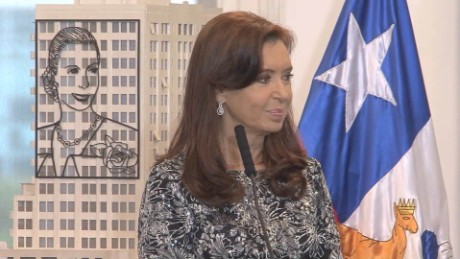 Fernandez de Kirchner, a leftist, is still widely popular since leaving power less than five months ago.
According to state-run news agency Tlam, Federal Judge Claudio Bonadio ordered the raid that included real estate management in Puerto Madero, in the Argentina capital along the banks of the Rio de la Plata.
The raid, according to Telam, was part of a corruption investigation involving the former president, her son Maximo Kirchner, a congressman, and her daughter Florencia. The family faces illegal enrichment charges related to their ownership of Los Sauces, a real estate partnership that belongs to the Kirchner clan.
Bonadio launched the corruption investigation centering on the real estate partnership on April 8. The investigation stems from an accusation made by Margarita Stolbizer, an opposition congresswoman who said Fernandez de Kirchner found ways to hide incriminating information while in office.
“Files stay asleep while those being investigated are in power, but they wake up as soon as they lose their power,” Stolbizer told CNN affiliate TN on April 19.
In her first court appearance in front of Bonadio on April 13, Fernandez de Kirchner said the facts of the cases are “absolutely false” and suggested she and her family are the victims of political persecution.
“This hypothesis of illicit association, built in a capricious manner by the judge, is just another example of how arbitrary this process has been. It also reveals the intention by the government (of President Mauricio Macri), with the strictly necessary collaboration of the judicial power, to subject myself to a legal case that results in my loss of freedom,” Fernandez de Kirchner wrote.
The former president is also being investigated as part of another corruption case, dubbed “dolar futuro” by the media in Argentina. Fernandez de Kirchner is accused of selling U.S. dollars futures contracts at levels well below market rates together with her late husband and two business associates: accountant Leonardo Faria and Lazaro Baez, owner of several construction firms.
Faria testified in court last month that the group had put in place “a systematic plan with the purpose of emptying the government coffers through (the approval of) public works.”
“I believe that the judge is doing what he has to do which is to detain them, to charge them, to move forward with the investigation.”
Baez was arrested in early April along with his son and an accountant. All three have denied wrongdoing. Faria is still behind bars and has been cooperating with authorities.
Fernandez de Kirchner’s successor, the center-right and business-friendly former Buenos Aires Mayor Mauricio Macri, also faces a corruption investigation.
Macri is accused of benefiting from an offshore company owned by him and family members. The allegations first surfaced after the disclosure of the Panama Papers scandal that has embarrassed world leaders over foreign accounts meant to shield them from tax obligations and revealing their total assets.
“In this particular case, regarding how it pertains to me, it was a legal operation made by another person to form an offshore partnership to invest in Brazil, an investment that was finally not made. They had put me as director […] back in 1998. The partnership stopped operations in 2008 because the investment was never made,” Macri told newspaper La Voz in the Argentine city of Cordoba.