Donald Trump: ‘The shackles have been taken off me’

October 12, 2016by Moe Nelson in Blog tagged Donald Trump: 'The shackles have been taken off me', politics 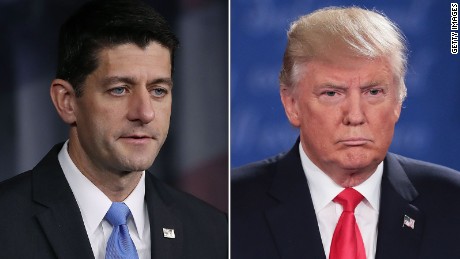 The GOP nominee is lashing out in a stream of tweets boiling with rage and resentment, slamming House Speaker Paul Ryan for effectively cutting him loose and accusing the party leadership of dooming his campaign. It’s a meltdown unprecedented by a presidential nominee this late in the year.
“It is so nice that the shackles have been taken off me and I can now fight for America the way I want to,” Trump said in a tweet that raised the prospect of a full on civil war in the Republican Party. Such a battle would pit his loyal supporters against the rest of the GOP, including vulnerable lawmakers running for re-election that could threaten the party’s hold on Congress.
Trump’s outbursts come with his national polls tanking and his route to the 270 electoral votes he needs to win the White House closing fast.
Trump also called Ryan, the Wisconsin Republican, “very weak” and “ineffective” — an attack that comes the day after after Ryan told House colleagues he’d no longer defend or campaign for the GOP presidential nominee.
“Our very weak and ineffective leader, Paul Ryan, had a bad conference call where his members went wild at his disloyalty,” Trump tweeted.
“Despite winning the second debate in a landslide (every poll), it is hard to do well when Paul Ryan and others give zero support,” he also tweeted.
Trump also criticized GOP Arizona Sen. John McCain who rescinded his endorsement of the Republican presidential nominee over the weekend.
“The very foul mouthed Sen. John McCain begged for my support during his primary (I gave, he won), then dropped me over locker room remarks!” Trump tweeted.
Trump said Republicans who are “disloyal” are “far more difficult” than Clinton.
“Disloyal R’s are far more difficult than Crooked Hillary. They come at you from all sides. They don’t know how to win – I will teach them,” he tweeted.
Trump’s move to go rogue and incite anarchy in the party leaves Republican leaders in a tough position. His behavior risks alienating moderate and swing voters vital to maintain GOP control of the Senate. But repudiating Trump entirely would risk a backlash by the record breaking millions of voters who flocked to the Republican nominee in the primary process.
He reiterated his frustration at his first post-debate fundraiser Tuesday in San Antonio, according to two sources. He repeated what he tweeted, saying that he feels “free from the shackles” and appeared generally in a good mood. He also mentioned Ryan, saying it was unfortunate that a small part of the party was not focusing on balanced budgets/immigration.
Ryan sought a middle ground Monday when he told House Republicans on a conference call he will no longer defend or campaign for Trump, instead spending the campaign’s final four weeks focusing on House and Senate races in an effort to help the GOP maintain control of Congress.
GOP on the precipice
“Paul Ryan is focusing the next month on defeating Democrats, and all Republicans running for office should probably do the same,” Ryan spokesperson Brendan Buck said Tuesday, a statement echoing his response on Monday.
“The speaker is going to spend the next month focused entirely on protecting our congressional majorities,” Ryan’s spokeswoman, AshLee Strong, said in a statement Monday.
Trump even cast the Democratic Party — which nominated Hillary Clinton — as a stronger organization than the GOP that nominated him.
“With the exception of cheating Bernie out of the nom the Dems have always proven to be far more loyal to each other than the Republicans!,” he tweeted.
The feud follows an outpouring of high-profile Republicans slamming the real estate mogul, after the release Friday of a 2005 recording featuring Trump making lewd and sexually aggressive comments about women.
Republican elected officials and party elders lined up Saturday to denounce Trump’s incendiary remarks. Some sitting members of Congress pulled their support entirely, while others blasted the remarks but continued supporting the GOP standard-bearer. Some said they wanted Trump to step aside so that his running mate, Indiana Gov. Mike Pence, can lead the ticket. Pence said in a CNN interview Monday that he’s sticking with Trump.
Even a top ally, New Jersey Gov. Chris Christie, criticized Trump for not going far enough to apologize for his lewd and sexually aggressive comments about women that emerged in a video from 2005.
“I was there when he found out about it and there’s no question in my mind he’s embarrassed by it,” Christie told WFAN radio in New York. “But I think that he should have been much more direct and much more focused on saying, just saying ‘I’m sorry’ and only ‘I’m sorry,’ and that’s what I would have done.'”
And Trump is not just targeting his own party. At a rally in Pennsylvania on Monday night, he raised the prospect that the election is being rigged to stop him becoming President, a scorched earth narrative that threatens one of the bedrock principles of American democracy — faith in the electoral system itself.
“I hear these horror shows, and we have to make sure that this election is not stolen from us and is not taken away from us,” Trump said in Pennsylvania.
Trump will have his first chance to demonstrate his shackle-free approach at an evening rally in Florida on Tuesday night, that could offer a preview of how he plans to act in the final four weeks of the election, if his campaign tips into a deeper free-fall.