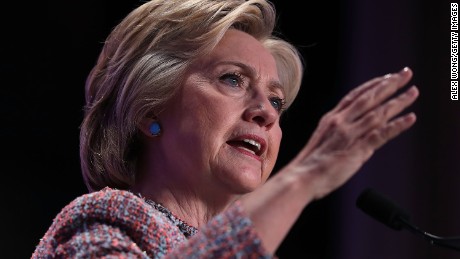 Cincinnati (CNN)Hillary Clinton responded to the shooting of three officers in Baton Rouge, Louisiana, on Monday, arguing that the killings not only show the need to come down hard on people who kill officers, but also how the shootings do damage to people pushing criminal justice reform.

The presumptive Democratic presidential nominee, urging people to see the world through both the eyes of officers and African American men who have been targeted by law enforcement, told the NAACP at their conference in Cincinnati that “empathy works both ways. We have to try to see the world from their eyes, too.”
Clinton’s comments come a day after Gavin Long, a 29-year old ex-Marine, opened fire on officers in Baton Rouge, killing officers Montrell Jackson, Matthew Gerald and Brad Garafola. The shootings come weeks after officers shot Alton Sterling on July 5, a shooting that sparked protests and outrage across the country.
“This madness has to stop,” Clinton said. “Watching the news on Baton Rouge yesterday, my heart broke. Not just for those officers and their grieving families, but for all of us.”
Clinton said killing officers is a “terrible crime” because those men and women “represent the rule of law itself.”
RELATED: Baton Rouge shooting: 3 officers dead; shooter was Missouri man, sources say
“If you take aim at that, and at them, you take aim at all of us,” Clinton added. “Anyone who kills a police officers and anyone who helps, must be held accountable. And as president I will bring the full weight of the law to bear in making sure those who kill police officers are brought to justice. There can be no justification. No looking the other way.”
Clinton said this includes “investing in our police,” including training officers on use of force and the need for officer safety and wellness.
At the same time, though, Clinton stressed the need for police departments to get better at handling cases of police brutality or shootings, citing the deaths Philando Castile and Alton Sterling, two officer-involved shootings that sparked protest across the country.
“The death of Alton and Philando drove home of urgency we need to make reforms to policing and criminal justice, how we cannot rest until we root out implicit bias and stop the killing of African Americans,” Clinton said.
Clinton used the speech to pledge reform of police departments, saying that she will hold them accountable, enforce better date on use of force and “support independent investigations of fatal encounters with the police.”
“So I pledge to do you I will start taking action on day one and every day after that until we get this done,” Clinton said. “When the 24-hour news cycle moves on, I won’t.”
Clinton is in Cincinnati as part of a multi-day trip across the country while Republicans gather in Cleveland for the Republican National Convention.
Clinton, who will also speak at union events in Minnesota and Nevada this week, noted that presumptive Republican nominee Donald Trump declined to speak at the NAACP event.
After Clinton noted that Trump would disagree with her characterization of him, she added, “but of course he declined your invitation. So all we can go on is what he has said and done in the past.”
Clinton went on to hit Trump for stoking questions about President Barack Obama’s citizenship, charging that he “plays coy with white supremacists.”
Clinton also noted, for the first time, that as a real estate mogul in New York, Trump was accused of discriminating against black tenants.
The former secretary of state noted on Monday that the first time Trump was quoted in the New York Times was for “refusing to rent apartments to African Americans.”